Need is truly the mother of invention. It is when spouses Shelley Rowarth and Michael Rowarth, both the co-inventors, could not sleep because of the intense snoring of the latter. Michael, a professional toolmaker with all-embracing involvement in product design, worked hard to address the issue of how to stop snoring.

He also engaged in using a variety of anti-snoring equipment available on the market. None of them worked in ideas he wanted, so Rowarth Design Limited was born. Michaels engineering experience was a total benefit to come up with an excellent design.

Tongue Restraining Device (TRD), the principle of the Silent Treatment, can aid people who snore, as well as those suffering from sleep apnea. They are cost-efficient and less burdensome as compared to CPAP machines. TRDs work by clipping the tongue forward during sleeping time. This position maintains the tongue from blocking the air passage. During sleep, the tongue tends to collapse and relax against the back of the throat. Clinical studies have shown that TRD’s are both effective and safe in the lessening of apnea disorder and snoring.

Oftentimes, some TRDs make the mouth salivate excessively, or make it a lot moist; that is a side effect but it basically goes after a short period of time. Difficulty in swallowing may also be considered as a side effect but is linked with the shape and size of the device.

Silent Treatment is a boil-and-bite type of apparatus. It does not exert force for the lower jaw to be forward as this can put an intense strain on the jaw.

The Silent Treatment is held fixed by an impression only of the side teeth. Its tongue pad presses on the upper surface making the teeth keep in place. The tongue pad is wrapped with tiny spurs. These tiny spurs are tailored to connect with the papillae on the tongue; akin to that of a Velcro. The tongue is thus kept in place.

Further, one added advantage of Silent Treatment is its dependence on muscle memory. It acts as a guide for tongue muscle. The muscle then remembers the position it’s been kept to adopt in times of sleep, and after a short period of time, you will only utilize it once every week to aid in retaining the so-called muscle memory.

The prototype of the Silent Treatment is extraordinary. It utilizes the impression of the teeth as a crucial role in the design but does not force the jaw into another place. It is trademark-protected internationally, and a patent application is on its way.

Be that as it may, it is not guaranteed that it can work for everyone. If the tongue is not the primary issue on the person’s snoring and apnea disorder, or if their mouth is small, the Silent Treatment will not meet your expectation. However, they guarantee a full refund on the product.

It is recommended to utilize a mirror to lead your position. In the kit, they also include a small wedge-like tool that will definitely help you in positioning the apparatus. Plus, you have to press the outer edges against each other to reach optimum results.

During the device fitting, bring water to a boil and boil it for about sixty (60) seconds. It is known that in boil-and-bite apparatuses, you have to let it cool; place it in your mouth and bit down. This time you have to exert extra effort. After that, the Silent Treatment is ready for moulding after it comes out of the boiling water. In other words, just faithfully follow the directions.

In general, an adjustment would cost you about 3-4 days. The initial night is the crucial period; you will surely have a hard time to swallow it while it is intact. There would be saliva build-up and the tendency is that drool will come out in no time. But don’t worry because the Silent Treatment holds the tongue resolutely. In the second and succeeding nights, you will slowly get used to it. You can wear it a little longer as compared to your first day. The key here is to keep on trying. You may feel uneasy at first but you will surely get used to it. There may be difficulty in swallowing because there is a tendency that the tongue might force is down. Thus, decreases the level of comfort.

Silent treatment will be efficient for the right individuals. The right people will surely have the patience and time to get used to it while practising. The adjustment period makes it a bit complex to get helpful reviews of its efficiency.

To add, the device is not approved by PDA because of the simple fact that it is made in New Zealand. Though the company is trustworthy and based on reviews, all the transactions are honest and worry-free. You can order online and it is hassle-free because they can ship via regular or expedite courier. Internationally, the estimated time of delivery will range from two to three weeks from purchase.

While it is true that this product can be an efficient product at times, it is not for all people. It is best recommended for better efficiency to utilize AirSnore excellent solution as compared to the Silent Treatment because the mouthpiece in AirSnore moulds itself and it is a bit elastic with very soft bristles that will not give any uneasy feeling to users. If you are interested in knowing more about this product you can take a look at my AirSnore Review.

A feeling of comports is higher when using AirSnore rather than using the featured product. And once it is in place, it moves your jaw a bit to clear your upper air passage. This will give you the freedom to breathe properly while you sleep, and thus eradicating snoring activities, which will you rarely get in the Silent Treatment.

Now, you can get a good night sleep without sacrificing your comfort level. As if you are not using any apparatus. 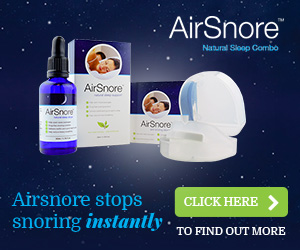